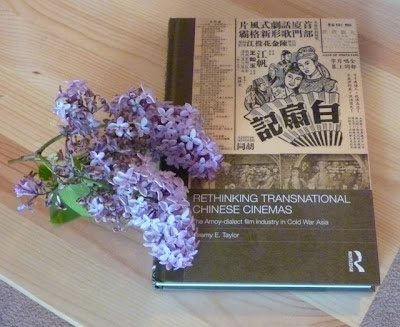 There's a great deal to be said in praise of Taylor's new book (2011 still counts as "new" in academic non-fiction) but it happens that it doesn't contain what I was looking for.

The book as a whole illustrates a strange world that both arose and disappeared with the changing political geography of the 20th century: the Hokkien speakers of Taiwan and "the south seas" were centrifugally arrayed around Xiamen (廈門) --and, after 1949, they found themselves more-or-less suddenly separated from their cultural homeland.

A cascading sequence of political changes ensue (Malaya becomes Malaysia, etc.) with implications for the commercial and cultural vitality of the Hokkien language (or languages) as a medium for cinema.  The book also includes some useful comments on radio, theatre, music and other media.

The text is loaded with anecdotes of anthropological interest, and one of my first reactions to it was a sense of surprise in discovering the extent to which the style (and jargon) of cultural anthropology is now the prevalent fashion (far outside of the academic discipline itself).  About 30 years ago, I do not think that the discussion of "transnational ethnography" would have been found in a book of this kind, nor even the word "ethnography"; to observe this is not a criticism of the book, but just a remark on the extent to which anthropology has displaced formerly-fashionable tropes in the analysis of popular culture (and this trend is certainly preferable to seeing jargon borrowed from Freud or Hegel).

As one example of such an anecdote (that needs no further introduction):

[In 1955 there were] two films —one Mandarin the other Amoy-dialect— which both centred on the figure of Mazu [媽祖 = Má-chȯ́-pô], the Goddess of the Sea and protector of seafarers.  The Amoy-dialect film, entitled Shengmu Mazu zhuan (the True Story of Mazu), was funded by […] Chiayi-based theatre-owner Lin Zhang.  It was filmed at Wader Studios in Hong Kong (although some outdoor scenes were shot in Taiwan) by the small Amoy-dialect production house Bi Da, and starred the perennial Jiang Fan.  The Mandarin film, Shengnü Mazu zhuan (The Story of Mazu), was funded and produced by the Taipei-based China-Light Movie Company, with the veteran Shanghai actress Zhou Manhua playing the title role.
A legal dispute arose […] over accusations of plagiarism […].  The dispute, however, highlighted the significant differences between the two interpretations of the figure of Mazu.  The Mandarin film tells the life story of a young woman called Lin Moniang from a village in Fujian, pior to her posthumous deification.  The Amoy-dialect version doesthe same, but presents Mazu as a being with superhuman powers who, halfway through the story, leaves the mortal world and is transformed into a benevolent deity able to influence the actions of others.
Certain ways in which Mazu was presented in the [Amoy-language] Nan Yang-funded film caused problems in Taipei.  References to the "goddess descending to earth" (shennü xiafan) in the film's script, for instance, were identified by censors as evidence of "superstitious" elements of the sort that had been outlawed in 1953.  These same superstitious factors were also attacked by sections of the media in Taiwan […].  This may also help to explain why the Mandarin[-language] film was so adamant about its own "non-superstitious" credentials —theatres promoted it as a movie that "commemorated the spirit of Mazu" but did not "advocate superstition".  [Op. cit., p. 60–61]

The book also deserves some praise for going above and beyond the usual (and abysmal) standard of Routledge non-fiction books: significant effort has been made with the cover and also with design, layout and illustration of the text (although I would have preferred to see more Chinese-language within the text, not sequestered to a glossary, and more actual Hokkien written wherever possible).  This is a huge step above what I've now come to expect from Routledge (i.e., the dismal blue cover of "digital on-demand printing", with the poorest possible quality provided at the highest possible price).

What's missing from the book (from my own strange perspective) is simply a concern with the language, and that's fair enough: the author had a long list of substantive concerns of his own (historical, political, cultural and methodological) to be addressed in 126 pages.  However, the history of Hokkien cinema contains the raw material for someone else to write a book that would make use of the same film archives as a window onto the study of the language.  The cinema of this era was produced (and marketed) across dialects (with networks linking studios in Hong Kong to cinemas and investors in Taiwan, Singapore, Manila, Kuala Lumpur, etc. etc.) and some of the specific films discussed in the book involved multiple languages and dialects (delivering none-too-subtle political messages to the audience and, sometimes, pronouncements on the social status of the different languages in relation to one-another) so we might yet hope that some linguist would find a laboratory for examining various forms of spoken Hokkien in the same film-archives --and, perhaps, there are some materials that might yet be useful for students, if they could be extracted and enframed for study.